Quarterback of the Future: A Study

It makes a ton of sense to go out and get a top-tier quarterback. But, where do you draft the rest? The answer might surprise you!

What is the safest pick a fantasy player can make in dynasty fantasy football? Here is a hint, one of them scored a 500 million dollar contract this off season. Did you say a top 6 quarterback? You would be correct!

A top 6 dynasty startup ADP quarterback, according to myfantasyleague.com ADP data, is the safest bet you can make in dynasty fantasy football. These quarterbacks have a 62 percent chance to finish that startup year as a top 12 QB. By year 3, they actually increase to a 67 percent chance of finishing as a top 12 QB. Not only do they have a great chance right out of the gate, but they also consistently stay at the top.

Those top 6 QBs in this year’s startups were Patrick Mahomes, Lamar Jackson, Deshaun Watson, Dak Prescott, Russel Wilson, and Kyler Murray. It would be hard to argue against any of these picks before the season and even at this point I would not doubt any of them going into the future. 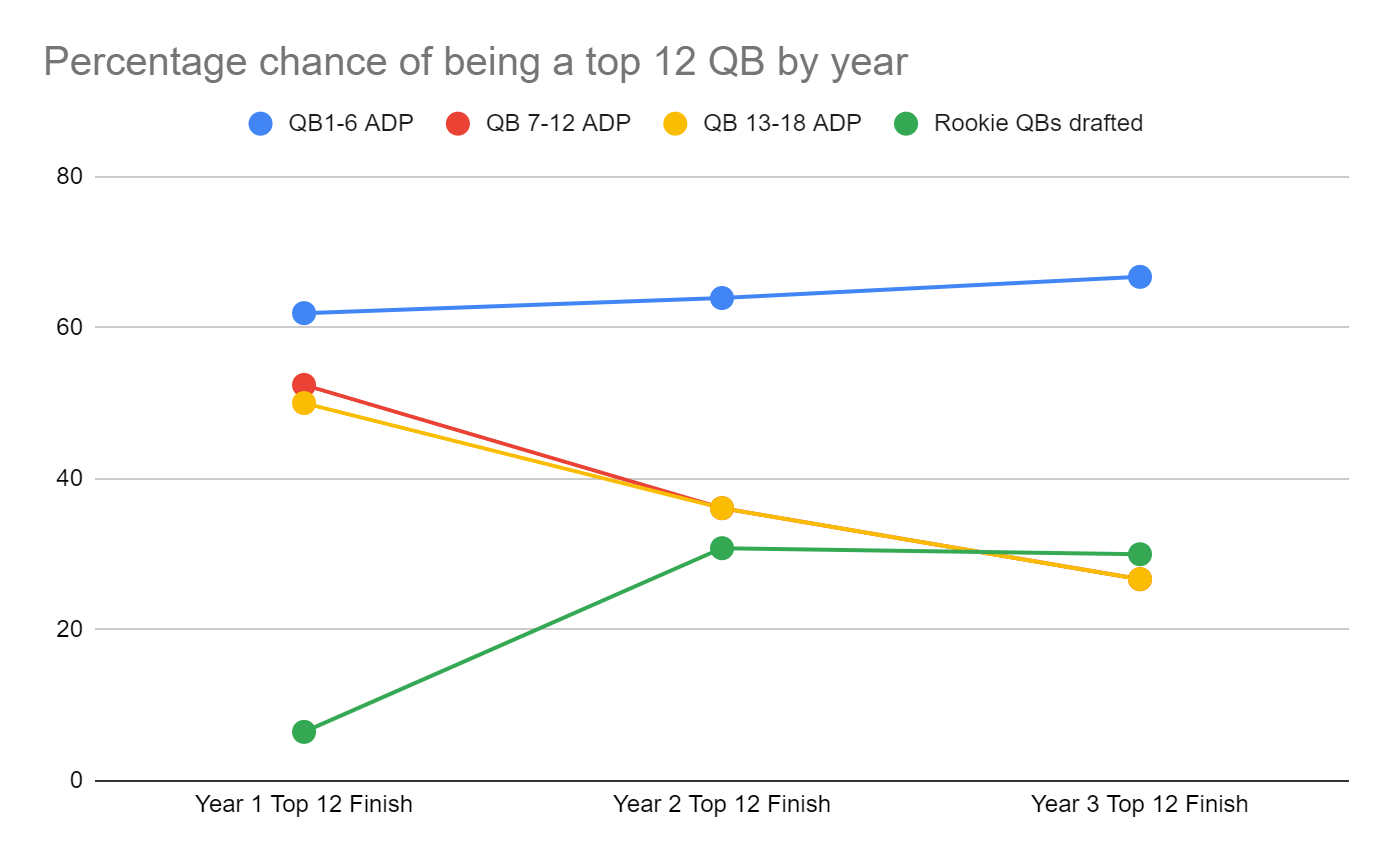 The interesting thing is with the next two tiers of quarterbacks. There is virtually no difference in the 7-12 ADP startup QBs and the 13-18 ADP startup QBs. As you can see in the graph above, in years 2 and 3, the percentages are identical and QBs 7-12 just slightly have a better chance of being in the top 12 that first year out. After the top 6, you might as well wait until you hit that 3rd tier of QBs before pulling the trigger on one because why pay up at that point if the odds do not change for you later?

There are a few relatively simple reasons for the dropoff during the 2nd and 3rd year for this tier though. The main one being that this is where most of the top aging QBs fall. Tom Brady, Drew Brees, Matt Ryan, and Aaron Rodgers all fell in that 7-12 ADP for this 2020 startup season. At least two of these players could easily retire after this season (Although, at this point, I’m not sure old man Brady ever will).

So what about those rookie QBs? Many dynasty leagues are superflex now and those top picks tend to be the best rookie QBs coming out, and this year was no different. Many people took Joe Burrow number 1 overall in superflex leagues, including myself. Now Burrow has looked great this year and even Justin Herbert, who appears to be the rookie steal this year, has looked amazing. Both of these players are currently sitting inside the top 12 overall QBs. They are both ahead of Lamar Jackson (at the time of this being written).

This is definitely the exception to the rule though. Rookie quarterbacks have only finished within the top 12 fantasy QBs 7 percent of the time. Now this could be a little skewed due to counting any rookie qb taken in a fantasy rookie draft according to fantasyfootballcalculator.com. However, even the great Patrick Mahomes sat his rookie year. I believe the key to rookie quarterbacks comes in that second year. The data seems to show that a quarterback that cracks into the top 12 during their 2nd season will stay there into their 3rd season.

The obvious takeaway here is to get yourself a top 6 quarterback. I am not blowing anybody’s mind by saying that. However, I was shocked to learn that there was no real difference in the next two tiers of QBs. So if you are planning on waiting on QB in your dynasty league then I’d wait until about the 10-18 range to start loading up on your QBs. My biggest recommendation would be to grab a top 6 QB early and then grab a few in that 10-18 range. If you are going for the championship in that first year, then go ahead and grab an older QB. I would be wary of overdrafting the rookie QBs in startups due to the uncertainty with them. In the end, you will have to take a chance on some young quarterback, and if you hit, you could be set at the position for years and years to come.

In My Defense – End of Season
Game Theory and Asset Management: Stay Liquid
%d bloggers like this: