One of those assignments was to select a player from within each tier of rookies whom they believed had the greatest chance of being a bust. I was interested in what the fantasy community thought, so I put out a Google survey through twitter and some league message boards. I received many responses and want to share those results.

I run the Future Fantasy Leaders of America (FFLA) club at my middle school with a couple of my buddies. After successfully launching the club in the fall, our most dedicated (degenerate?) students sent an email asking if we could restart the club for the draft. We were able to have one meeting before COVID-19 shut school down. So we went virtual.

We have a weekly Zoom call and each week they have an assignment. One of those assignments was to select a player from within each tier of rookies whom they believed had the greatest chance of being a bust. I was interested in what the fantasy community thought, so I put out a Google survey through twitter and some league message boards. I received many responses and want to share those results.

Tiers are based on ADP pulled by @the_FF_engineer and posted on his site http://theffengineer.com/. For his ADP, Kevin used data from SafeLeagues 1QB leagues on MFL. Managers selected the one player in each tier they think will fail in the NFL. The higher the percentage the less confidence fantasy managers have in the player.

The top tier of 1QB rookie drafts consists of Jonathan Taylor and Clyde Edwards-Helaire. CEH is going slightly ahead of JT in most drafts, but the debate is heated.

Although CEH is going earlier, most managers feel that he also has the biggest chance to be a bust. However, there were only two choices, so I wouldn’t worry about your CEH shares.

The second tier consists of the remaining “big 5” RBs and the two top receivers: JK Dobbins, D’Andre Swift, Cam Akers, CeeDee Lamb, and Jerry Jeudy. The players are listed in the order of ADP with Jeudy slipping to the back end of the tier.

Tier 3 consists of players with great draft capital but question marks about their ability to translate their talent to the next level. These players are Justin Jefferson, Jalen Reagor, Ke’Shawn Vaughn, and Henry Ruggs. If you are active on twitter, these players were and are the center of many debates between fantasy analysts.

Well, the people have spoken. This is the most lopsided victory(?) of any tier. Although managers may have questions about Ruggs who was the first WR selected in the draft, they do not believe at all in Vaughn who was the 7th RB selected at pick 76 overall.

In this tier we see the first QB going off the board and the next four WRs. These players in order of their ADP are Joe Burrow, Tee Higgins, Denzel Mims, Michael Pittman, and Brandon Aiyuk. These are the players who will be selected at the end of the first and into the beginning of the second round in most of your drafts. Depending on personal preference and roster depth, this may still be too early for some to take a quarterback. The WRs in this tier were selected from pick 25 (Aiyuk) to 59 (Mims).

Interestingly, the players that sandwiched this tier of WRs tied for the least confidence. Personally, I voted for Mims because as a Jets fan, I have no confidence in their ability to make a good WR pick.

This tier has a little of everything with a QB, two WRs, two RBs, and one GoBot (a running back who changed to a wide receiver for the combine and then changed back to a running back). In order, we have, Tua Tagovailoa, Zack Moss, Laviska Shenault, AJ Dillon, Bryan Edwards, and Antonio Gibson. Personally, I rostered three of these players on devy squads and have acquired way too many shares of Laviska Shenault. All the players in this tier have the requisite draft capital to be successful in the NFL.

With the addition of a sixth player to this tier, we see Tua and Dillon receive the smallest percentage of votes at this point, garnering 2% and 3% respectively. Conversely, Moss does not have the confidence of many managers. Much of the information we heard on Moss was about his poor combine juxtaposed to his great tape. Gibson is the opposite of Moss, he had a great combine and although he had a great final season at Memphis, he only had 77 touches in his college career.

Tier 6 finishes the 2nd round and takes us through the middle of round three. At this point we are introducing players selected on day 3 of the NFL Draft. All analysis shows that these players are inherent dart throws, which is why managers attempt to acquire 1st and 2nd round picks in rookie drafts. In order of their ADP, tier 6 includes Anthony McFarland Jr., Chase Claypool, Justin Herbert, Darrynton Evans, Joshua Kelley, and KJ Hamler.

As mentioned above, managers know that these picks are dart throws and the results prove the fact. Hamler is the most questionable player in this tier despite being drafted in the middle of the 2nd round. My vote was for Hamler. Since 2000, only 3 players who are Hamler’s size have had 60+ receptions and 700+ yards in a single season: Andrew Hawkins (1), Jamison Crowder (3), and Cole Beasley (2).

Much like the previous round, the votes were evenly spread between the players, except Cole Kmet. Most rookie TE rankings did not have Kmet as the TE1 in the class, and that is reflected in his receiving the most votes in the tier. Chicago has a less than ideal QB situation and hasn’t had a good TE since Zach Miller’s injury.

In order to compare players between tiers, I used a coefficient of variation. A few things to remember prior to looking at the graph. The formula I used assumes that all players within a tier have the same baseline value. We know that isn’t true. It is normal for the last player in a tier to have a higher no-confidence score. Also, I did not give an option for none of the above, which especially skewed the results of Tier 1. I don’t believe most managers think CEH will bust, but when forced to choose, he was chosen. Lastly, the higher the number the more confidence people have in that player. 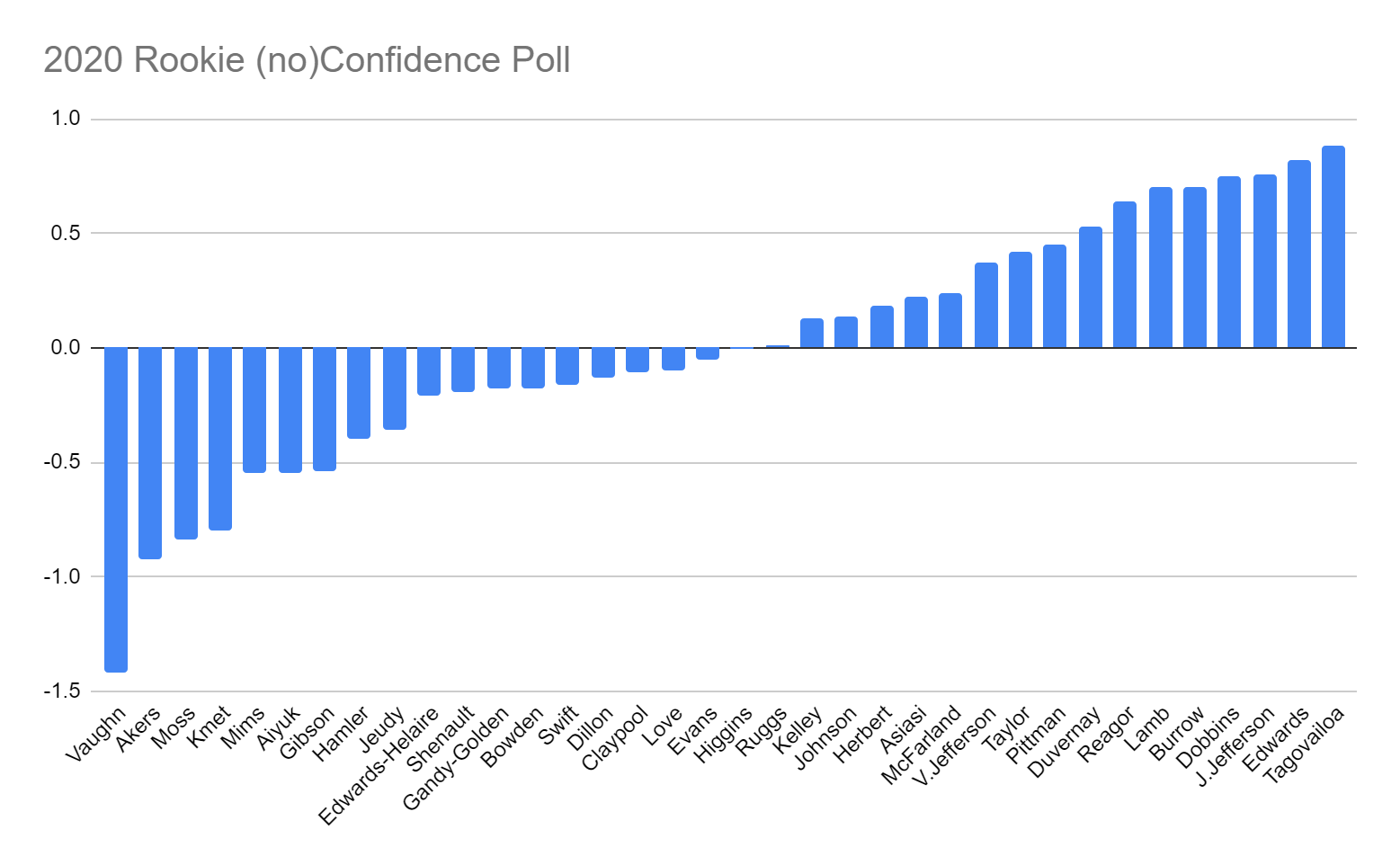 Thank you for reading and feel free to leave a comment or hit me up on Twitter.